Virtual private networks are essential business tools. A VPN is an easy and affordable way of improving your security in the short and long-term. The worlds of personal and corporate VPNs used to be entirely separate. But now many of the most popular VPN providers are offering both types of service.

Here are five of the best business VPNs available today.

Table of Contents
1
1. Top Business VPN solution- NordLayer
2
2. Best VPN for Small Businesses - Perimeter 81
3
3. Best VPN for Businesses - Twingate
4
4. Best Small Business VPN- Encrypt.me
5
5. ExpressVPN
6
6. IPVanish
7
FAQs for buiness VPNS
Do I need a VPN for my small business?
How much does a VPN cost for a company?
Why do companies use a VPN?
Are VPNs illegal? 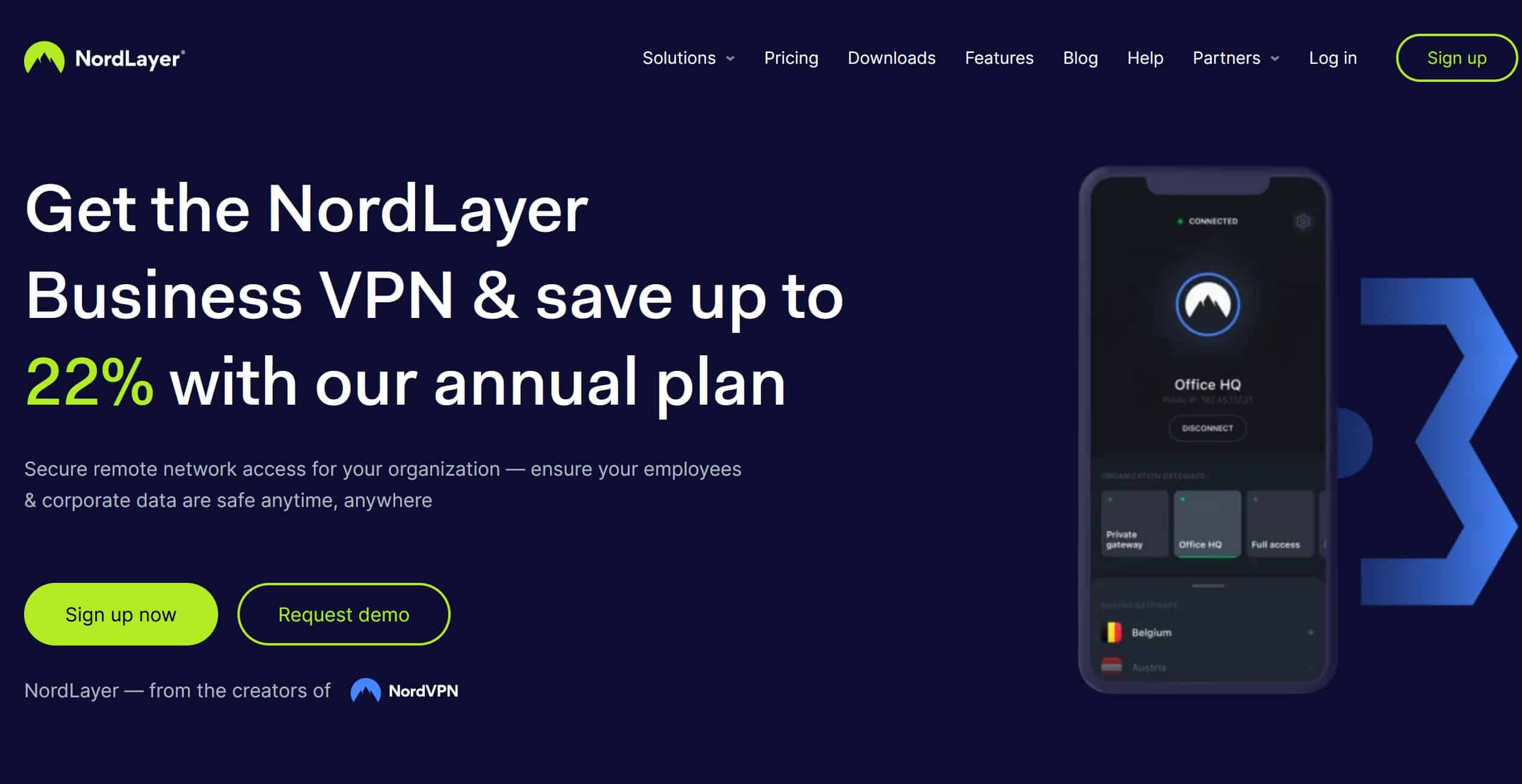 If there is one VPN provider whose name you know, it is probably NordVPN. If YouTube sponsorships are anything to go by, Nord is one of the world’s biggest brands right now. Nord launched NordLayer as a parallel service to their consumer VPN. Teams is a business-focused VPN service with more robust encryption than the standard service, and better encryption than most of their competitors are offering.

One of the most noteworthy selling points of Nord’s service is the use of 2048-bit double encryption. This encryption is the kind of overkill that means any business can trust NordVPN with their most sensitive data. It is also considerably more robust than the alternatives offered by their rivals. Even if someone does intercept your data, there’s no way they will be able to decrypt and read it.

For people who want to be certain that all their internet traffic passes through a secure VPN server, Nord offers a kill switch. This kill switch means that as soon as Nord detects your internet or data connection dropping, it will stop any outgoing data until your device re-establishes a connection with the VPN. A comprehensive no-logs policy ensures your privacy remains protected.

NordVPN Teams also offers access to a dedicated business VPN server. You can use this dedicated server for your own internal needs. Every account also gets a dedicated IP address assigned to them.

For small and medium-sized businesses, Perimeter 81 is one of the best VPNs available. Anyone looking for an alternative to a hardware-based VPN will be hard-pressed to find anything more comprehensive

One caveat worth noting is that Premier 81 is designed for a minimum of five team members. Therefore sole traders may want to look at one of the other options below instead. However, if you need a VPN for a relatively large team, Perimeter 81 is one of the best network security services out there. A cloud-based system, it gives you the ability to rapidly scale to fit your business needs without having to invest in expensive hardware.

The best part is that you get all of this in one unified platform. This empowers your teams to manage all your network and team settings. The software is also compatible with Windows, Mac, Linux, and both iOS and AndroidOS. You can even use Perimeter 81 with Chromebook and Linux 64.

State-of-the-art security protocols, including OpenVPN, WireGuard, and IKEv2, along with a zero-trust network and auto Wi-Fi security make perimeter 81 one of the most secure business VPNs available to small and medium-sized businesses. In addition to multi-factor authentication, users can log in safely their location.

Using a software-defined perimeter, Perimeter 81 can limit access to your network through manageable system control, making it simple and seamlessly migrate with numerous cloud-based services.

Signing up to Perimeter 81 will grant you access to their fantastic customer support department. You will also be covered by the 30-day money-back guarantee, giving you a whole month to ensure that the service is right for you.

Twingate is not a VPN in the traditional sense but it is a virtual private network in the technical sense. Twingate enables businesses to have secure remote access to the organization’s data, applications, and remote environments. It does this by allowing any devices that want to connect to a network to do so following the access permissions given to them. By giving users and their devices access to only a small part of a network and its resources, Twingate ensures the whole network is not compromised if one of the devices on the network is.

Also, by providing access to devices at the application level instead of the network level, Twingate offers better security than VPNs that give devices permissions at a network level, thereby widening the threat and damage radius in case of an attack.

A major difference between Twingate and other VPNs is that there is only one point of access for the whole infrastructure, whereas there are multiple points of contact to the internet through VPN servers located all over the world. Once this point of contact - a centralized web admin console known as the Twingate client - is established, any device that has the necessary permissions can connect to the network, thereby accessing the resources it has privy to.

VPN data, since it has to go through the internet, is often visible to hackers and malicious third-party actors. This makes VPNs vulnerable to different types of attacks over the internet. Twingate makes this almost impossible using what is known as split tunneling. This allows for traffic that needs to go to a resource on your network to access the network through Twingate, while all other data that needs to go to an internet destination can do so without going through Twingate.

Twingate is also easy to set up and deploy and, because it has a simple web-based admin console, it is easy for IT managers to configure their network wherever they may be. Because devices only need to connect to the central admin console, a Twingate network can be scaled up to however many devices the organization wants to access the network.

With a reduced risk of embarrassing data breaches, reduced infrastructure costs, and rapid deployment, Twingate is the perfect solution for businesses that take their security seriously.

Encrypt.me is a VPN service aimed specifically at businesses. It is one of the few VPN services available to businesses that offers unlimited simultaneous device connections on every one of its plans. In theory, you could have hundreds of devices connected at once and it would make no difference to Encrypt.me.

Encrypt.me is available on most platforms. You can download the mobile app for both iOS and Android or download the desktop client for Mac and Windows. There is also an app for Amazon devices. Regardless of the device you are using, installation is simple and getting set-up is quick once you have an account. The security protocols are the same across devices and every version offers DNS leak protection. You can also take advantage of private endpoints to securely connect to your office network remotely. Encrypt.me also offers content filtering, enabling you to block the specific content on your network and prevent staff from accessing it.

Subscriptions start at around $16 per month with a two-user minimum. This represents pretty value, especially when you factor in the unlimited simultaneous connections. The only real drawback is the Windows app, which some people have found a little clunky and dated. You should also be aware that there is some logging of user activity. A 2-week free trial gives you time to get to grips with Encrypt.me and ensure that it is right for you.

Encrypt.me is a great choice for SMEs in need of a VPN with unlimited simultaneous connections. The logging policy might put some people off, but the intuitive interface and impressive tech specs will entice others.

ExpressVPN is another excellent VPN for individuals and sole traders. The relatively meager device limit will be too restrictive for some people. There is also no specific business plan available. However, ExpressVPN offers a secure and fast service, with global server coverage.

ExpressVPN is available on a range of devices. As well as desktop clients for both windows and mac, you will find mobile apps for iOS and Android. ExpressVPN even supports Linux, Kindle Fire tablets, Chromebooks, Nooks, and web browsers such as Firefox and Chrome. All the separate apps are simple to use and reliable.

Like all the best VPN providers, ExpressVPN uses state-of-the-art encryption and security protocols. Dedicated DNS servers and split tunneling further enhance the security provided by the robust encryption algorithms. The use of a no-log policy ensures that no information about your browsing sessions is retained.

If you run into any issues with the service, 24/7 live chat support will help you troubleshoot the problem quickly and painlessly.

While ExpressVPN is a little more expensive than the other consumer VPNs it is competing with; it is much cheaper than most business VPNs. There’s no business-specific subscription plan available, yet this is still one of the best VPN services available to businesses today.

IPVanish is another consumer VPN provider whose service happens to be ideal for small businesses. They have recently started to offer unlimited simultaneous device connections, enabling firms to cover all their devices under a single plan. However, note that the terms of service state that each account is supposed to be for a single household. If you try to register too many devices, IPVanish will likely revoke your access.

Whether you use IPVanish on Windows, Mac, or mobile, you will find the apps stable and easy to use. No matter where you are in the world, or where you want to be, IPVanish’s global network of servers means you will always be able to find a suitable connection.

24/7 customer support is available to help you navigate any technical issues you come across and save you banging your head against the wall.

IPVanish is excellent for smaller businesses and small traders. However, larger businesses might find the lack of business-focused features disappointing. Regardless of your needs, IPVanish is a fast, secure, and reliable VPN provider with high-speed servers available the world over.

Businesses can’t take their data security too seriously in 2020. Any of the business VPNs from our list will enable workers to connect to your network remotely and securely.

Do I need a VPN for my small business?

A VPN for businesses isn’t essential, but it is highly recommended for security purposes. A VPN can protect your business from cyberattacks and data loss. It also allows employees to log into company IT systems from anywhere, safely and securely.

How much does a VPN cost for a company?

VPNs are very affordable and are often charged according to how many users need access, making it a cost-effective solution for small businesses.  Shop around for the best price for the options you need.

Why do companies use a VPN?

Companies use a VPN to protect their businesses from security breaches. VPNs are also useful if employees need to access geo-blocked websites. A good VPN can ensure only authorized people access company data and anyone logging in from an off-site location is doing so via a secure connection.

In some countries, like China and Russia, VPNs are illegal, but in the US, UK, Canada and Europe, VPNs are legal as long as they are not used for illegal purposes.

The economy is in flux. Prices keep going up, and sometimes it END_OF_DOCUMENT_TOKEN_TO_BE_REPLACED

Everyone wants to make a difference. Whether we want to make changes END_OF_DOCUMENT_TOKEN_TO_BE_REPLACED

Everyone wants to make a difference. Whether we want to make changes END_OF_DOCUMENT_TOKEN_TO_BE_REPLACED